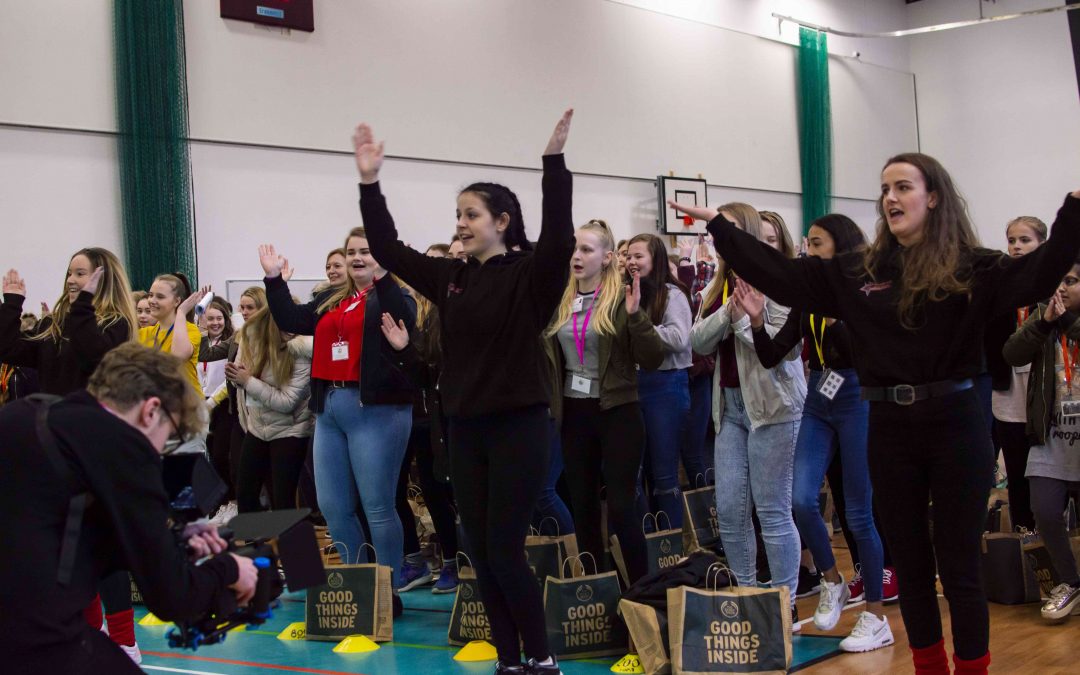 More than 100 high-profile women from sport, science, arts and business across the Fylde Coast played their part in inspiring local young women to “smash glass ceilings” and see themselves as equals as the first-ever International Women’s Day Festival took place in Blackpool.

The atmosphere at Blackpool Sixth Form was electric on Saturday as more than 200 school pupils from across the region delved into activities from African drumming, laser shooting, film-making, cosmic chemistry, coding to confidence building and wellbeing workshops at the unique festival, as part of global International Women’s Day.

With Kate Shane of Merlin entertainment, Tracy Manning of Fylde Council, Andrea Kaye of Wyre Councillor and Sharon Senior, an employment director at Sinclair Broadcast Group, among some of the inspirational role models.

Lancashire pupil Zafeera Abdoola, 12, gave a heart-felt speech as the event was officially opened, telling the attentive audience that feminism isn’t about women trying to be superior than men, but about ensuring that “all humans are equal”.

With Rio Olympic bronze medallist Kelly Massey reiterating that “anything is possible” before getting everyone moving with a physical warm-up to music.

Blackpool-born comic Ruth Cockburn, told youngsters how Blackpool had “made her” and pushed her towards opening new doors.

Telling the young women never to give up on their dreams, the stand-up comic, who regularly performs across Europe and has billed at the Apollo, The Comedy Store and Shakespeare’s Globe, said: “I have been told for the past 15 years that women are not funny!”

“I am often the only woman on the bill and I have experienced first-hand what it is like to be a female in a male-dominated environment. I have turned up at gigs and people have asked me if I’m the girlfriend of one of the acts. I’m proud to say ‘no mate, I’m your headline act tonight’.”

She added: “It’s really important for young women, who are told that they can’t do certain things, to have positive role models to show them ‘yes, you can’.

“So, events like these are important to let young women know they can be what they want to be, give them a voice and let them know that they will be listened to.”

Christine Hodgson, Chair of Blackpool Pride and Place Partnership and Chair of Capgemini UK plc, one of the world’s foremost providers of consulting, technology and outsourcing services, called the atmosphere “intoxicating”.

The former Blackpool Elmslie School pupil said: “Having worked for 35 years in a male-dominated world, I think fantastic events like this are vital in shining a light on opportunities for women.

“Blackpool has more than its fair share of inspirational women and this event opens the doors of opportunity for these young women to gain new experiences and meet different people, which is fantastic.”

Deborah Terras, director of The Washington Group, which organised the event, said: “It was all about coming together as a call to action to support equality and gender parity.”

Mrs Terras, from Blackpool, added: “It was great to see young girls enjoying themselves, having such positive experiences and leaving with an action plan to make a difference to their lives – whether that be a career to embark on, or trying new things and ultimately believing that they can do anything if they set their mind to it.

“The Fylde Coast is an amazing place to live, work and enjoy. What makes it special are the people who live here – and we saw that first hand at the festival with women from all walks of life coming together and helping each other to make a difference.”

Baines School in Poulton-Le-Fylde was just one of 20 schools which took part in the event.

Pupils were paired up with role model Carolyn Mercer and teacher Holly Gibson said they were now planning further workshops both with Mrs Mercer and as part of a new afterschool club.

“This has been incredibly inspiring and valuable for our girls,” said Miss Gibson. “Many girls have a hard time with confidence and today has helped them to overcome that.

“They are buzzing and so it has inspired us to set up an afterschool club dedicated to growing pupils’ confidence. We’re hoping to run some workshops on the back of the event, motivating and inspiring the girls in the school to boost their own self confidence. We are also going to look at some training for the older pupils to become role models and mentor the younger pupils within the school.”

Carolyn Mercer said she was “thrilled” to be asked to take part in the festival and believes that “Equal rights and opportunities for women are not negotiable. They are an imperative”.

Ms Mercer, a former headteacher, whose motto is ‘working together works’, added: “Working with the young women and staff of Baines was an extra bonus for me. I’m always impressed and enthused by working with young people but these young women were superb.

“It’s worth remembering that young women are not merely part of the future, they’re a key part of the present. This was exemplified by the festival and the Baines young women.”

And, local solicitor Fiona Reid, said: “Blackpool has for many years been given bad press. As a Blackpool girl myself I know how the negativity about the town can affect you. I am extremely proud of my home town and it saddens me that this negativity can impact on a girl’s life.

“There are so many amazing and inspiring women from this town and this was a great opportunity to be a part of raising a girl’s aspirations for her future. “